Bonaventure Expressway turned Boulevard.   Montreal’s Mayor, Denis Coderre, has unveiled the design and concept for the new boulevard that will replace our ailing extension ,of the Bonaventure expressway. In 2017, the prestigious entrance onto University street, which of course leads us directly into the Downtown core, will leave all Montrealers and visitors to the island, impressed. 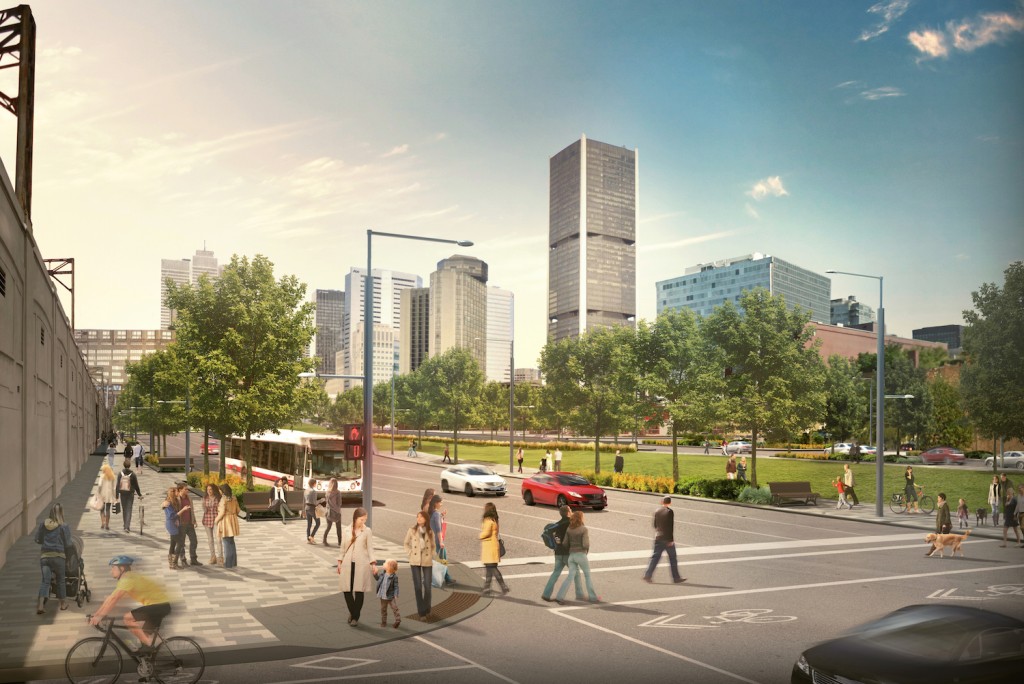 “Today we are unveiling the concept development of a flagship artery symbol of entry into a dynamic metropolis, welcoming, open to the world. The urban boulevard that will replace the current Bonaventure is a structuring project which I am confident will be the pride of Montrealers. Our ambitions are high for the legacy of the 375th anniversary; and we want to reinvent the Bonaventure corridor by integrating infrastructure and public places worthy of this major input from downtown, “said the mayor. ”The development concept presented today return visitors and commuters the image of a city with its ambitions and improve the quality of life for residents of the area located on either side of the new road. Our Government is proud to contribute financially to replace the current elevated structure of the Bonaventure by a ground boulevard, while ensuring the mobility of users to downtown Montreal, will recreate the links between the streets east-West sector, “said Robert Poëti , the Minister of Transport responsible for the Montreal region. This project requires an investment of the handsome sum of $141.7 million. Luckily, it receives some support from the Quebec government granted under the Agreement Montreal 2025, administered by the Secretariat in the metropolitan area.  Efficiency was the concept behind the newly developed avenue. This was not an easy task considering the varied type of users that depend on this route to arrive to their Downtown location; pedestrians, motorists, truck drivers, buses etc. This route has an added benefit, considering all the major residential developments in both Old Montreal and Griffintown, of facilitating the movement between adjacent boroughs. Not only will this turn into a functional route, including a new lane reserved for public transit in each direction, but it will also be aesthetically pleasing. The plans include more than 20 000 m2 of space designed for the public such as sidewalks, furniture, artwork and more than 300 trees to be planted. 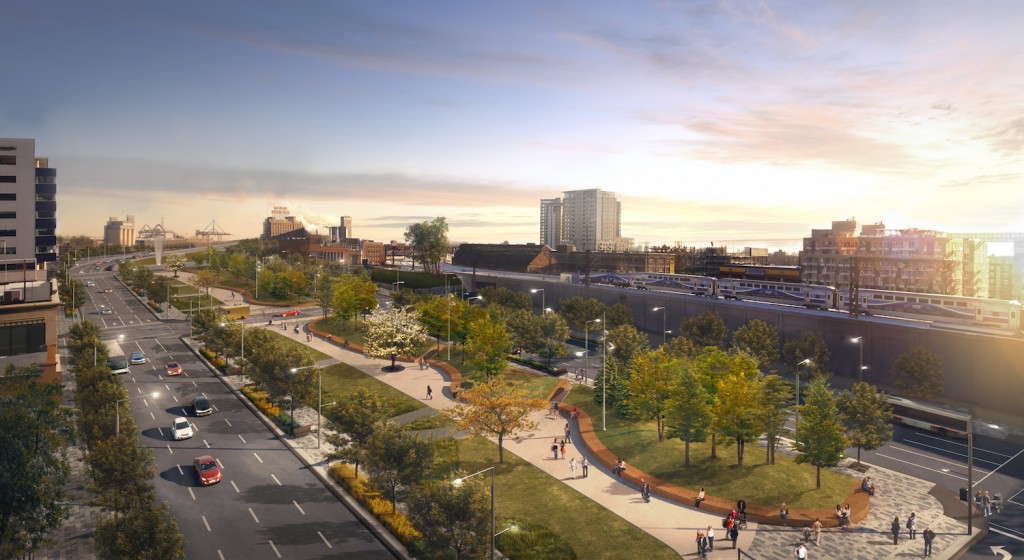 It’s hard to imagine what it will look like, since most of the work done up to date has been restoring the underground infrastructure. However, from 2015 to 2017, we will see glimpses of the urban boulevard and destruction of the current highway. The City of Montreal is quite aware that this constitutes some major road works, and is ensuring us that they will maintain the quality of life for the residents and workers who will be there daily. As with all construction sites in Montreal, life will go on. 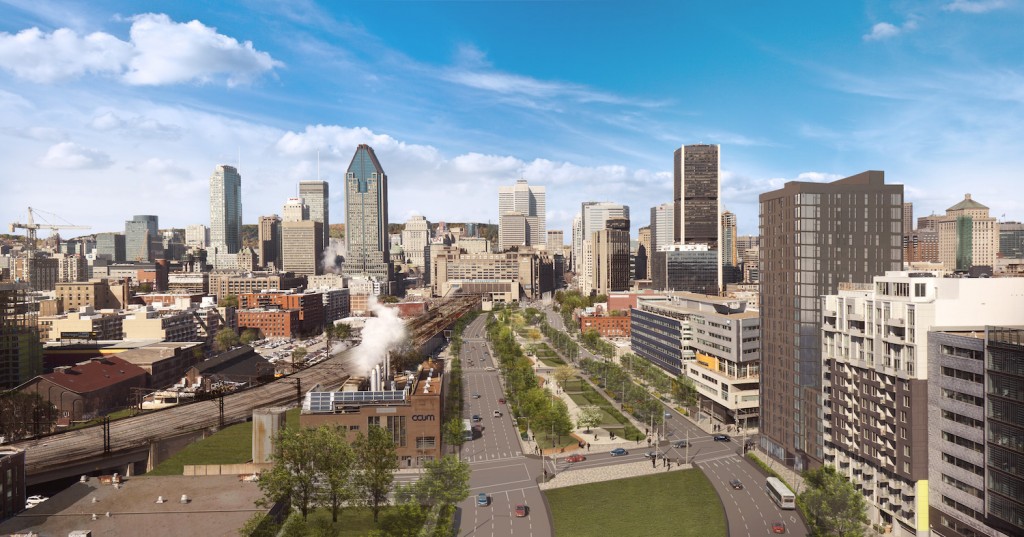 The real estate project M9 is located right next to the future park must see! www.mcgillimmobilier.com/m9-phase-4/ 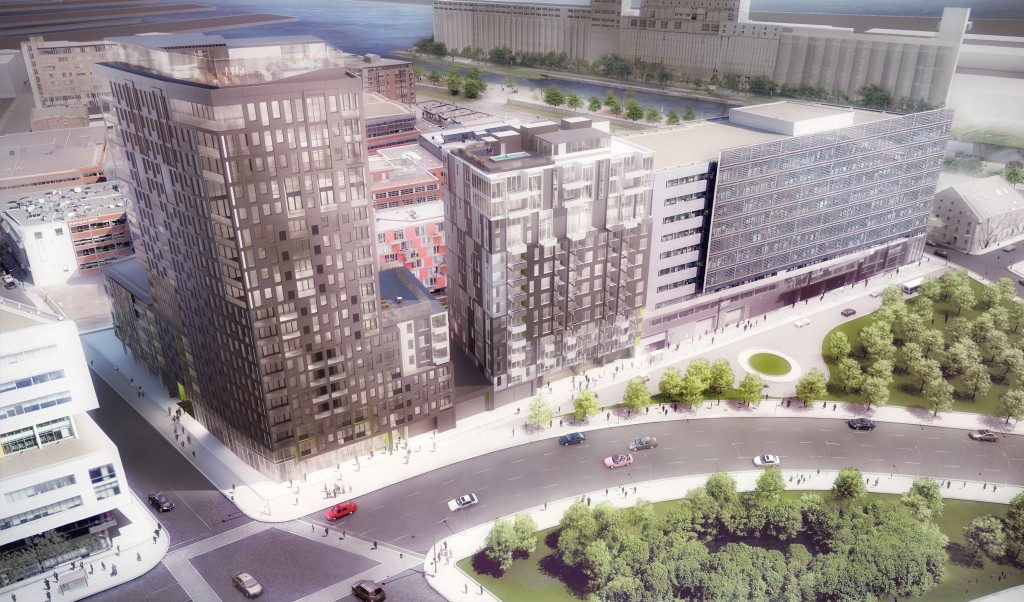