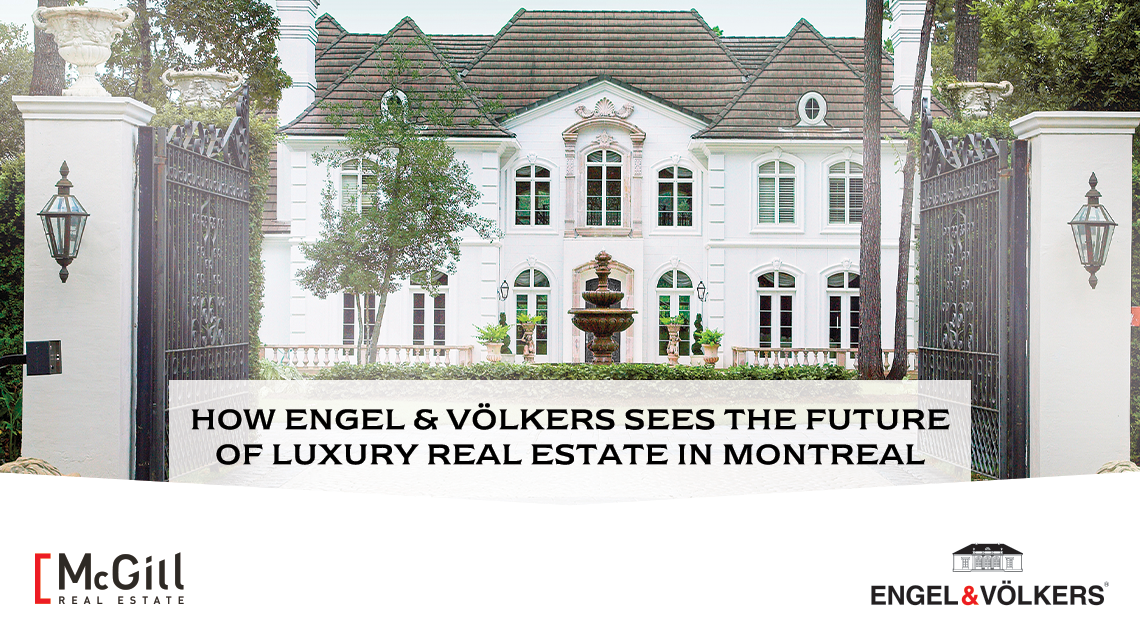 According to Groleau, both national and international investing in Montreal is going to continue to grow over the next few years.
With Engel & Völkers rated the top luxury agency in the province and McGill Real Estate representing close to 60 per cent of new condo sales in Montreal, Groleau is often sought after for housing market predictions.

“After two phenomenal years of sales in new construction, we saw the break coming this summer, with many people in travel mode. But now, with the start of the school year, we’re already seeing an uptick in online registrations and sales,” says the broker.

“We expect to see the strong demand pick up again in the second half of 2023. For the moment, a portion of clients is still waiting for a shift in the press headlines to make a move. But with the demand for housing far outweighing the supply, they’re going to have to move quickly when things pick up, which they will.”

According to Groleau, both national and international investing in Montreal is going to continue to grow over the next few years; even with the act to prohibit the purchase of residential property by non-Canadians coming into effect January 1, 2023.

That’s because, as people who come here to work, and study, the vast majority of foreign buyers in Quebec are exempt from the new law, as opposed to the situation in Toronto and Vancouver. Combined with immigration, it’s going to make it increasingly important for brokers and sellers to focus on all types of buyers.

And with French ranking as the sixth most spoken language in the world — and Quebec being the only French option in the Americas for French-speaking foreigners — it’s a huge draw.

As a global luxury giant with a powerful network behind it, Engel & Völkers Montréal/Québec is perfectly positioned to take advantage of this trend.

Originally founded in Germany in 1977, the international agency is one of few with a significant market share in luxury real estate in several countries. “It takes the strength of a sprawling network or even roots, in the case of Engel & Völkers. The idea is not to be everywhere, but everywhere it matters,” says Groleau about the brand’s strength and strategic growth.

With 11 locations across the province, Engel & Völkers currently does more buying and selling than all the other major Quebec luxury real estate agencies combined. It also recently announced plans to open four new locations in Toronto, where it already has three outposts.

“We inaugurated our South Shore boutique on September 1st, at Place de la Gare in the Solar/ QuartierDix30 and are currently in the process of finalizing our West Island boutique in Pointe-Claire,” Groleau says about the company’s local expansion.

“Several major Quebec real estate players are becoming increasingly present in the Queen City, so it’s logical for us to make our mark there as well.”

As for McGill Real Estate, the agency Groleau co-founded with his wife and business partner of 20 years, Debby Doktorczyk, it has a special place in his heart. Together, Groleau and Doktorczyk created agencies that have a long-term vision when it comes to the development of their brokers.

In fact, they invest close to $33,000 per year into each of their brokers, whom they view more as partners, which is in stark contrast to many other agencies.

“When I started in real estate, there were close to 8,000 brokers in Quebec and today there are close to 17,000, which is way too many. Especially when 50 per cent of them call it quits within one year and 90 per cent leave after two years,” says the agency owner.

“I refer to it as the Walmartization of our industry for maximum profit, where some agencies have short term visions and see brokers as lemons, to squeeze profits from. For Debby and me, real estate is about passion before profitability, and that’s the key to our success. It’s not the National Brokerage League, it’s the National Brokerage League All-Star Game; it’s demanding and it’s not for everyone.”

Currently, McGill Real Estate represents 76 per cent of all projects sold by the main specialized agencies and 60 per cent of new condos. Looking forward, Groleau hopes that his children will continue the family tradition and become the new faces of luxury real estate in Quebec.

Together, Groleau and Doktorczyk also take part in a variety of philanthropic causes, including the CHU Sainte-Justine Foundation and the CHUM Foundation.