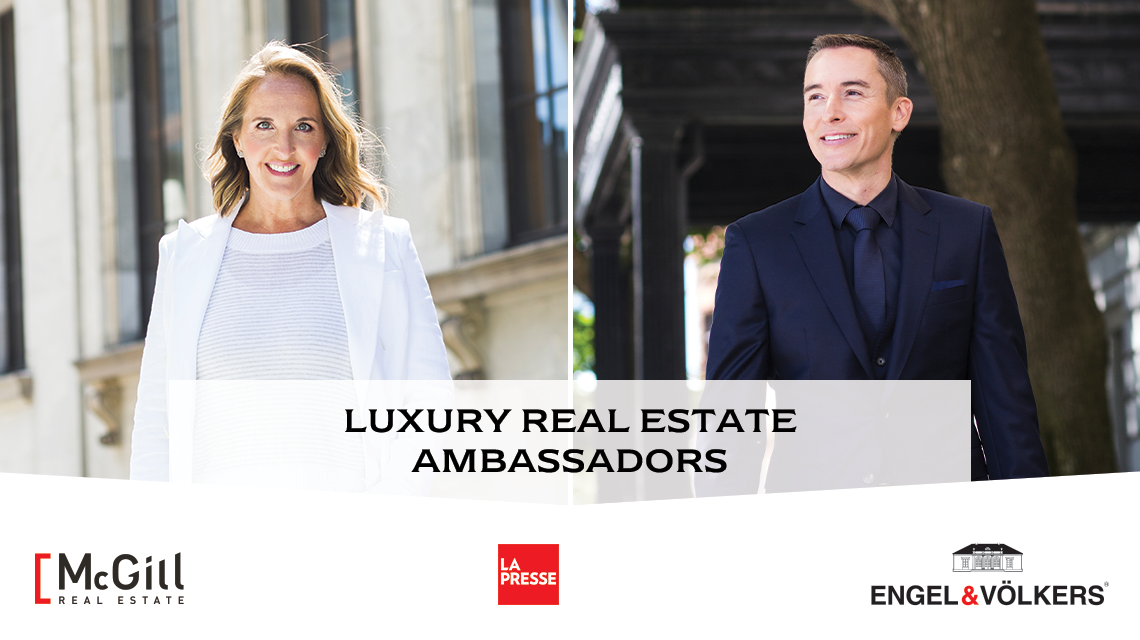 It’s not enough to advertise yourself as an expert in a highly specialized market like luxury real estate; you have to prove it. “In Quebec, Engel & Völkers Montreal real estate agency concludes six out of ten transactions, and its sister company, McGill Real Estate, achieves a similar feat with new condos,” says Patrice Groleau, owner of both companies. Here is the story (and some trade secrets) behind these successes.

The luxury real estate brand since 1977
It was while visiting the family of his wife, Debby Doktorczyk, in Belgium that Patrice Groleau discovered the prestigious German brand Engel & Völkers. This brand, founded in 1977, was dominating the whole of Europe unparalleled when it began its expansion in the United States and Canada.
The opportunity to obtain the rights for Quebec presented itself and the couple took their chance. They distinguished themselves from the 17 other aspiring groups and won over the jury. Three years later, Engel & Völkers Montreal became the number one luxury real estate agency in Quebec… and then repeated the feat for North America.

“In seven years, our real estate agency has become the most successful of the 1000 or so Engel & Völkers real estate boutiques around the world, both in terms of transaction volume and total value.”
- Patrice Groleau, owner, Engel & Völkers Montreal and McGill Real Estate

How to dominate the market?
Achieving such results requires a lot of effort and passion. These qualities are amplified by a strong corporate culture among brokers and employees. Like a sports team, the game system takes precedence over individual performance.

“We work a lot by intuition. The results we get are the sum of thousands of micro-decisions made each week. This magic is impossible to reproduce.”
- Patrice Groleau, owner, Engel & Völkers Montreal and McGill Real Estate
ENGEL & VÖLKERS Americas / Monde

A true luxury ecosystem
Beyond transactions, the Engel & Völkers team maintains close and authentic relationships with its clientele, which includes some of the most influential families in Quebec. Brokers and clients, often on the same boards of directors of numerous foundations, are big donors to Quebec charities, rub shoulders at their second homes and share the same professional, family and friendship circles. These shared values and natural affinities foster synergy and trust that reach beyond office hours.

Key acquisition in Toronto
Last August, Engel & Völkers’ Americas and Global Management proposed to the Montreal real estate agency to acquire almost the entire Toronto major franchise, in order to export its successful model to Ontario. The official opening of the new real estate boutiques is planned for the near future and will promote a beneficial complementarity between the two metropolitan regions.

Setting the standard
When Debby Doktorczyk and Patrice Groleau founded McGill Immobilier some 20 years ago, they became the first to establish a real estate agency that specializes in real estate projects sale and marketing in Quebec. This venture occurred at a time when this expertise was well widespread elsewhere in North America. Their model places a real estate broker in good standing with the Organisme d’autoréglementation du courtage immobilier du Québec (OACIQ) as an impartial intermediary between buyers and developers. The expertise of McGill Immobilier expertise goes beyond sales by offering turnkey services to developers, including market analysis, feasibility studies, profitability projections, unit mix recommendations, accurate unit pricing, branding and media planning.

At the heart of the success of 76% of condo projects in Quebec
The results speak for themselves: 60% of new condos sold in Quebec2 are sold by McGill Immobilier, and 76% of projects use the agency’s3 services. McGill Immobilier completes up to five to six times more transactions than some in-house sales teams and is part of the entourage of many contractors and architects as soon as a new project is launched.

Bright days ahead for Montreal
Despite some turbulence caused by the adjustment of interest rates and real estate prices this summer, Montreal still holds the winning elements for growth. It is the largest French-speaking city in North America and the cost of living is more affordable than in other Canadian and international metropolises. In a context where the province needs 100,000 new housing units per year, only 30,000 to 40,000 are being built, creating a supply deficit.

“People who buy a condo off-plan for delivery in two or three years can be patient with this temporary situation. We expect to see a significant upturn in activity as early as the second half of 2023.”
- Patrice Groleau, owner, Engel & Völkers and McGill Immobilier