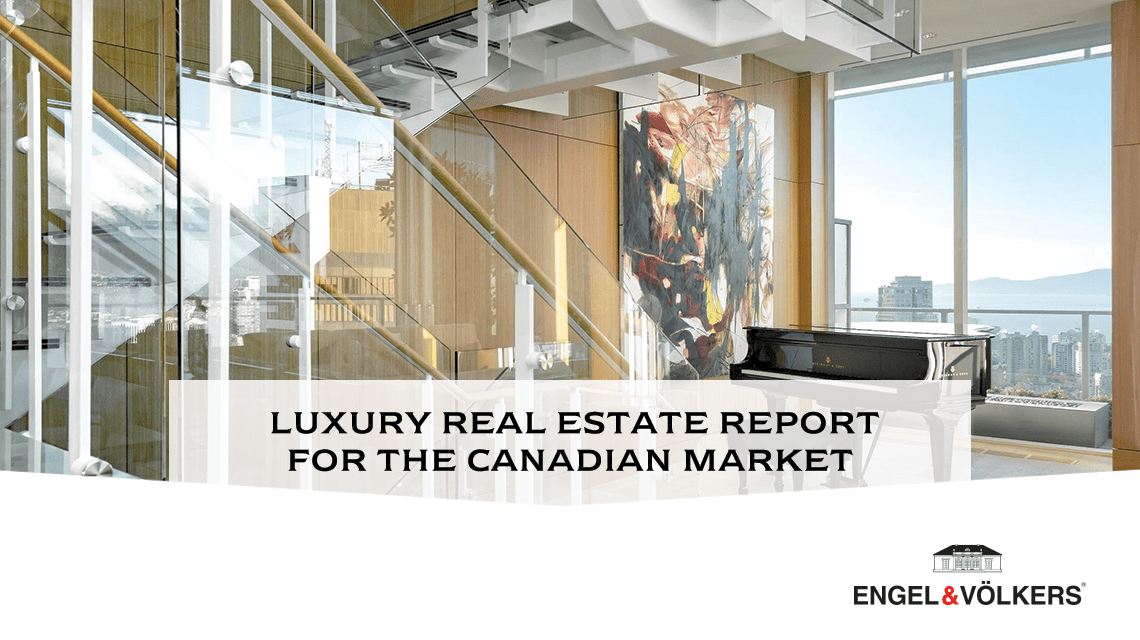 Montréal’s complete real estate stoppage from mid-March to May 11 is proving to be more of a pause rather than a tipping point toward a downward market. The end of Q2 is seeing Montréal hold its position as a seller’s market as prices climb and new listings hit the market. Pent-up buyer demand and persistently tight housing supply are helping the market rebound at a steady pace.

Montréal began 2020 on an upward trend, seeing prices sharply rise across all property types in the first quarter. At the close of March, Montréal celebrated the 23rd consecutive quarterly increase in sales. Transactions through Q1 surpassed a two-decade record, totalling 14,662 sales, with a 13 per cent increase year-over-year, the best sales result since 2000. At the same time, lockdowns due to COVID-19 had already begun, and real estate was deemed non-essential by mid-March. It returned after nearly two months, coming back on May 11. Montréal sprung into May, with sales and listing inventory discernibly improving with prices continuing to rise, reaching a new all-time high in June.

The market continued to rebound from COVID-19 impacts with home sales increasing 16 per cent year-over-year by the close of June.

After a historically low April and stabilization in May, June brought a flood of buyers returning to the market after lockdown restrictions lifted.

Buyers are seeking properties that fit a ‘stay at home’ lifestyle and the luxury market is benefiting from this spike in activity. There is a noticeable pivot away from properties over $5 million as affluent buyers are defining luxury differently. The age of excess is marked for departure and a new generation of homeowners is ushering in understated opulence. Simply put, extravagance for its own sake is outdated. This reprioritization of the property wish list began before COVID-19 and accelerated during the pandemic as more buyers realized their true needs and desires.

Engel & Völkers is noticing a new luxury buyer concerned with prioritizing lifestyle inside a smaller footprint resulting in the least possible impact on the environment. Many are investing in recreational properties and hobby farms, wanting to be closer to nature where they can enjoy open spaces with uninterrupted views.

Demand for properties in Montréal’s high-end and recreational markets is escalating as people seek out larger living spaces amidst the pandemic.

The top three areas for properties above $4 million are Westmount, Town of Mount Royal and Outremont. An influx of affluent French-Canadians is making Outremont a challenging neighbourhood to buy in as supply decreases. In contrast, Westmount, a traditionally English-speaking neighbourhood, is currently experiencing a buyer’s market with five times more listings than Outremont.

International buyer demand for these areas remains high, historically accounting for 20 per cent of Montréal’s buyer pool. In general, buyers with a budget above $3 million will find a promising selection of luxury properties compared to other global cities where inventory is more scarce and prices are strikingly higher.

For homes priced $1-2 million, Southwest, Le Plateau, and Mile Ex/Park Extension are the go-to neighbourhoods for home buying. These areas are sought after for their thriving arts community, restaurants, bars and vibrancy. Montréal’s tech ecosystem continues to grow and it is known as a world leader in the AI sector, positioning it as a strong investment market overall.

A strong first quarter helped cushion the impacts of COVID-19. Despite Québec being the epicentre of the pandemic in Canada, March started off busy for real estate with a four per cent residential sales increase year-over-year.18 However, listings dropped 37 per cent compared to last year. This was due to many sellers staying on the sidelines during the COVID-19 emergency lockdown from mid-March to May 11, forcing a pause in new inventory.

Rebound continued through June as both home sales and median prices increased, while supply remained scarce for the 57th consecutive month. This tight buying pool is positioning Montréal as a firm seller’s market with numerous multiple offer situations. New listings grew by 38 per cent year-over-year, but were offset by the substantial 16 per cent increase in home sales in June. Median prices across all housing types reached record numbers with single-family homes and plexes at $395,000 and $604,000, respectively, up 12 per cent year-over-year. 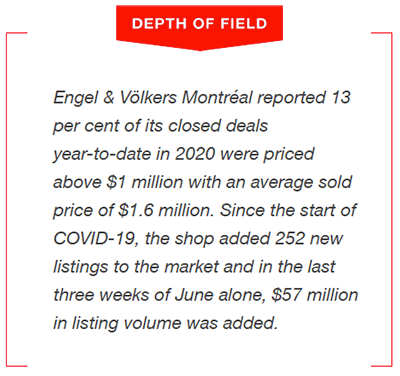 With limited inventory in Montréal, prices are expected to keep climbing due to sustained buyer demand. The market is seeing multiple offer situations with a majority of properties selling over asking price. Meanwhile, Bank of Canada regulations have had a small, limited impact on Montréal as the city saw a rise in new private lenders, providing more financial options for buyers. Lower interest rates due to COVID-19 also boosted consumer confidence, especially for first-time home buyers. Although figures indicate Québec’s April unemployment rate of 17 per cent was the highest since 197623, pre-COVID it was the lowest in 40 years. Engel & Völkers Montréal sees minor job loss influence on home sales and pricing as those affected are not large contributors to the housing market’s overall activity, specifically within the luxury segment.

Demand for more space is contributing to a rush to level-up and purchase larger homes. There is also a trend toward home renovation, with many people making upgrades to outdoor spaces, creating home offices and optimizing the spaces they have.

“We’re seeing multiple offers on luxury inventory that would usually sit on the market for a longer period. This is presenting a temporary selling opportunity for people who have unique properties and want to capitalize on their investment. Market demand is strong in the city core, and we’re seeing new interest in the countryside, as well as the emergence of the hobby farmer. Many buyers want to get back to basics on big pieces of land and feel close to nature. They’re looking to grow vegetables and farm for pleasure rather than profit. That’s something new, and we’re seeing rising interest as a result of the pandemic.”
- Patrice Groleau, License Partner, Engel & Völkers Montréal”

The move toward a permanent work from home lifestyle coupled with the demand for waterfront summer homes is increasing demand for properties outside of the city’s core. Rural inventory is feeling downward pressure as hobby farming is becoming a beloved pastime. This is leading to an upward shift in prices for small farms and country homes.

Existing low inventory coupled with pent-up demand from domestic and international buyers is positioning Montréal for a record-breaking Q3; this is pending borders and universities reopen by September.

Aside from being home to several prestigious Canadian universities, Montréal is known for its livability, green energy sector and is the only North American city with a major French-speaking population. Considering its strong quality of life and resources, Montréal will continue attracting people around the world as a safe market for real estate transactions.

If the same pace of immigrants who have historically entered the city returns once borders reopen, Engel & Völkers Montréal forecasts a considerable influx of international buyers, and demand to explode, particularly in areas offering private English-speaking schools – causing the market to narrow and prices to surge. Inventory is expected to continue to be low due to a shortage of land and growing desirability to permanently live in Montréal.

In June Median prices across all housing types reached record numbers with single-family homes and plexes at $395,000 and $604,000, respectively, up 12 per cent year-over-year.

For those looking to sell, Engel & Völkers Montréal is advising now is the time to take advantage of these market conditions, especially if the home offers unique features. Current buyer psychology for prioritizing space and amenities, influenced by the pandemic, will not last forever.

Summer will continue to be busy as current conditions pose a selling opportunity with homes moving quickly once listed due to pent-up demand. This will lead to a slower fall season with most new listings expected to come on the market before the end of September.

Engel & Völkers Montréal has recently partnered with Four Seasons Montréal for the sale and marketing of the prestigious Private Residences at the top of the Four Seasons Hotel. The residences are priced between $6-15 million, marking record high prices for condos in Montréal.

Hochelaga-Maisonneuve is a neighbourhood growing in popularity for homes less than $1 million. It has transformed from a once predominantly industrial area to an up-and-coming borough known for its independent businesses, heritage buildings and green spaces. The east side of Montréal is expected to boom as the west becomes saturated. Investors should keep an eye on new developments in all areas of the city.