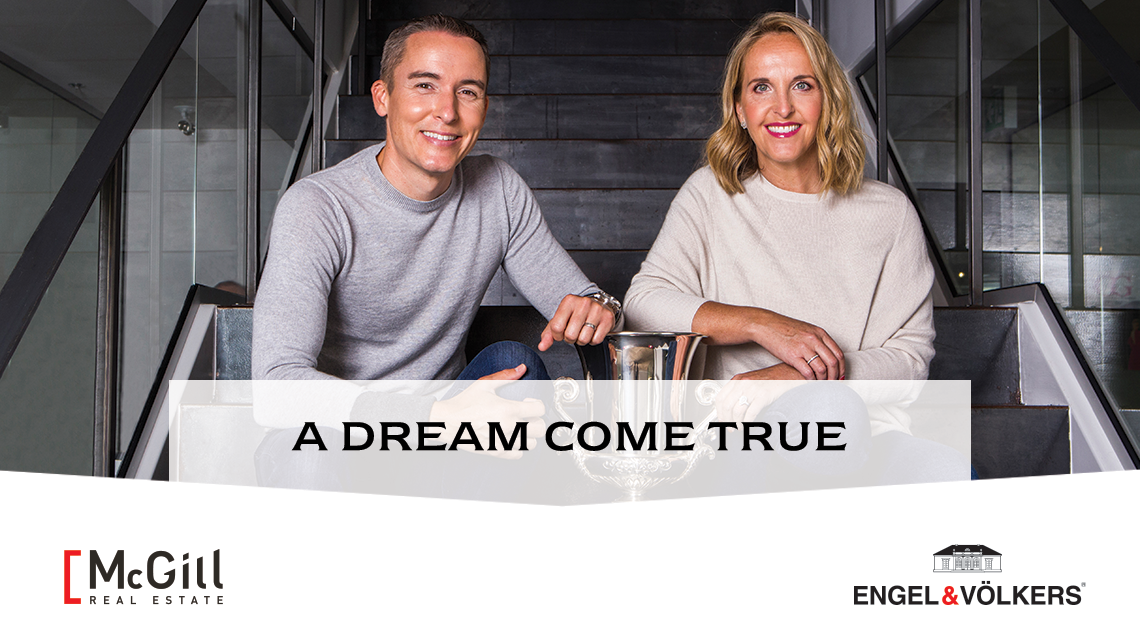 THE REAL ESTATE SHOP CONCEPT OF ENGEL & VÖLKERS: ALREADY 10 IN THE PROVINCE OF QUEBEC!

With its arrival in the province in 2015, the Quebec franchise of the German real estate brand Engel & Völkers, specialized in the sale & acquisition of luxury real estate was the perfect opportunity for Patrice Groleau and his business (& life) partner, Debby Doktorczyk to make their dream come true in creating the “utopic agency” for which they would have liked to work for as brokers.

“We became the number one luxury real estate agency in terms of volume in Quebec after only three years of operation while the industry was convinced that we would not even make it”, he says with pride.

According to Patrice Groleau, who bought the exclusive rights for Quebec, Christian Völkers, the founder, is a “genius”. “He is the Steve Jobs of real estate ” says, Mr. Groleau, with enthusiasm, who himself is a whiz in marketing. Engel & Völkers has more than 800 shops in more than 30 countries.

Having previously worked as a broker for traditional agencies, Mr. Groleau admits that he never felt comfortable there. “My ideas were not heard,” he says. At Engel & Völkers Montreal, the businessman praises the creativity of his employees, who come up with their own initiatives and ideas. The goal is to have to have fun while aiming to be the best while constantly improving.

AN EXPERIENCED TEAM OF BROKERS

According to him, his real estate agency is positioning itself to be the “future of brokerage” by specializing in and selecting quality homes. Along with Debby Doktorczyk, he is now the largest North American franchisee of the German brand, covering 85% of Quebec with its real estate shops, including in Montreal and Quebec City. The Montreal shop even came out on top of the list of Engel & Völkers franchises in the Americas in 2018, and first in the world the following year, ahead of cities such as Dubai, Paris and New York. The results for 2020 will only be revealed in a few weeks, but Mr. Groleau is confident that they will be well positioned again this year. “During the pandemic, we blew away our numbers from last year, which had already ranked us in the #1 spot,” he reminds us.

People of all ages and nationalities make up our team of experienced brokers, who were carefully selected to create “a kind of incomparable chemistry”, according to the co-owner of the Montreal branch. “We know them all, we know their families, ” says Groleau. “It sounds very cliché, but it’s more than a mission statement on a website. We have moved from words to action.” He hopes to eventually hand over the reins of the company to his children. A vision he is already working towards today, since several family members are among the 190 employees and brokers of Engel & Völkers and McGill Real Estate. When my chartered accountant was 15 years old, she was at my wedding,” he says. “Today, her mother and husband work for us. My best friend, my sister-in-law….”

A CONTINUOUS GROWTH FOR 15 YEARS

McGill Real Estate is the pioneer in Quebec in the sale and marketing of condominium projects with major developers within the city. The founders, Patrice Groleau and Debby Doktorczyk, seized the opportunity to cater to this niche practice, which already existed in the United States and English Canada. “It started with one project, two projects… and it went up gradually from year to year,” says Groleau, who adds that his agency currently has 33 projects. Without the passion for real estate that binds him to his wife and the fact that their strengths compliment each other tremendously, the agency would not have the success it has today. “And I think we have the flair to surround ourselves well. We are very selective, says the businessman.

The company’s real estate brokers located near the Museum of Fine Arts in Downtown Montreal get trainings on sale of condominiums on plan. The agency has been growing steadily for the past 15 years, despite the influx of resale of condominiums since the beginning of the pandemic. Unlike many of his competitors, Mr. Groleau feels that they have performed very well for the year 2020.

“When we reached 25% of the market share in the greater Montreal area, it was already impressive, but then a 50% market share in the midst of a pandemic, that was just wow!” says Groleau. There is no one on the market today that can boast the same scale as McGill Real Estate. ” While the public appreciates them mostly for their sales, the employees of the real estate agency also support collaborators, especially in terms of the image of the brand and the feasibility studies.

“The company has no plans to expand to other provinces,” says Groleau says. “We want to keep it in a format where we know everyone. We don’t want to lose that culture we’ve created, this atmosphere that brokers love, he adds, describing himself as more of a coach than a boss. “We’re more of a support team than management. There’s a kind of humility in the approach.”

The real estate firm is also involved in philanthropy, having been a partner of the Sainte-Justine UHC Foundation for several years through the annual ball. Despite the cancellation of the in-person event due to the pandemic, the Groleau Family decided to get involved personally, and as a sponsor, along with 19 other families to raise a total of $400,000 for the Foundation by March 31. They are also the sponsors and ambassadors of the Fondation du CHUM’s Grand Raffle, which aims to raise more than $2,000,000 for the CHUM’s research center (CRCHUM).

THE NUMBER OF BROKERS WILL DROP IN THE NEXT DECADE

Within the next ten years, the number of brokers will see a sharp decline, predict Patrice Groleau and Debby Doktorczyk, owners of McGill Real Estate and the Quebec franchise of Engel & Völkers.

While he estimates that there are currently 13 000 real estate brokers in the province, Groleau expects that there will be only 8,000 within the next decade. “Unfortunately, there is a myth about the ease of being a broker. Too many downplay the commitment in time and money, as well as the skills required,” says the businessman.

According to him, the future of the profession depends on the careful selection of brokers and the specialization of the agencies. Engel & Völkers aims to 1% of the province’s brokers and he estimates that only 5% of all brokers have a profile adapted to the reality of McGill Real Estate.