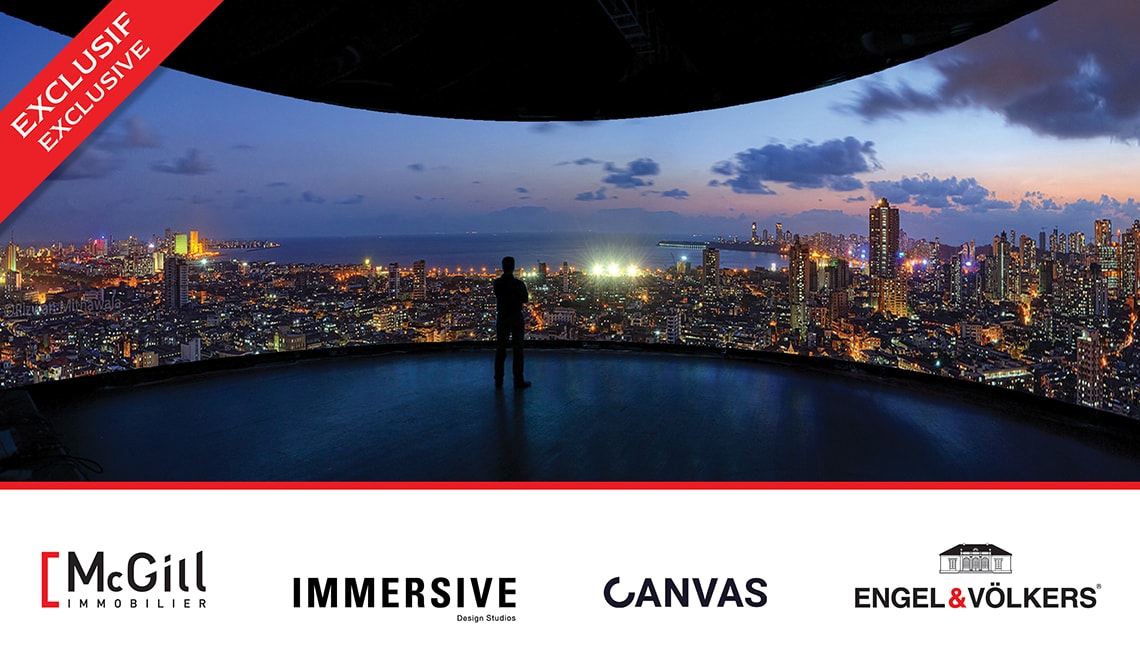 BOOM! A FIRST IN NORTH AMERICA! “DEBBY DOKTORCZYK and PATRICE GROLEAU, co-owners of McGill Real Estate and ENGEL & VÖLKERS hit another home-run by signing for exclusivity of the CANVAS interactive platform developed by Montreal-based company IMMERSIVE DESIGN STUDIOS, holder of the WORLD RECORD for the HIGHEST NUMBER OF PIXELS in a real-time 3D screen in collaboration with the world giant graphic card creator NVIDIA… CANVAS is EXCLUSIVELY presented at the CHARLOTTE Project in GRIFFINTOWN by developer HUIT DEVELOPMENT a subsidiary of AXXYS Group. www.mcgillimmobilier.com/en/charlotte-condo-project-griffintown The revolution in brokerage continues … WE ARE THE FUTURE OF REAL ESTATE! www.mcgillimmobilier.com/canvas/

CANVAS, the interactive multimedia system allows buyers to freely move around in space and interact in their environment as though they were really there, all at a touch of a button on a tablet.  This platform requires no special goggles, nor a helmet to experience the real deal.  The 3D environments are presented in actual size on a 5 to 13 meter long giant screen.  The client draws the full effect of a virtually reality tour by visiting all the rooms of his or her future condo and even visualizing different finishing options (flooring, kitchens, bathrooms, furniture) according to their taste.  The visitor can even discover the building’s common areas, have exchanges with the greeter in the lobby and even see him or herself in the mirrors of his/her future condo!  The level of unequaled realism and dynamism allows for the most convincing personalized visits.

“We are extremely proud to be the first to adopt this technology in North America, with Mumbai being the other city which has access to this revolutionary system for residential real estate.  McGill Real Estate has exclusivity of the CANVAS system in Quebec for its clientele of developers, which will allow them to remarkably stand out in the industry and retain their market leading position.  This major innovation is also consistent with our determination to remain at the cutting-edge of technology and put our clients first,” declared Debby Doktorczyk, owner and President of McGill Real Estate.

« The CANVAS system is also used before games at the Bell Centre in Montreal, as well as at the Rogers Centre in Vancouver and we are currently working on establishing large-scale projects in Montreal, Halifax, Vancouver, New York and Miami.  We strongly believe that the usage of the CANVAS platform will be a huge asset for McGill Real Estate and will allow them to offer an unparalleled experience to their clientele,” added Kora Van den Bulcke, President and cofounder of Immersive Design Studios.

CANVAS holds the world record for the most pixels on a real-time 3D screen for the world giant graphical card inventor NVIDIA at the prestigious Consumer Electronics Show (CES) in Las Vegas in 2017.

Huit Development, a subsidiary of AXXYS Group a retail and commercial construction company throughout Canada and the United States, specializes itself in the development and construction of rental and condominium residential real estate projects in Greater Montreal.  Walter sur Atwater, 2100 Maisonneuve, the old maritime Hotel converted into a residential building as well as the Gramercy futures residences are just a few projects they completed as developers or builders.

Created by the Montreal based company Immersive Design Studios, the interactive media server CANVAS is an all-in-one platform that harnesses the power of 3D game technology to meet a growing demand for interactive and immersive shared environments in such applications as the sale of real estate. CANVAS unbelievably makes the projection of any content a virtual reality, enhanced reality and mixed reality as well as real time video and camera capturing, on any surface of any size, with a breathtaking image resolution.

McGill Real Estate is a real estate agency which specializes in the sale and marketing of new condo real estate projects in Montreal, with a portfolio of 8 500 condominiums, + 3 Billion $. Founded by Debby Doktorczyk and Patrice Groleau, McGill Real Estate builds close ties with the leaders of the city’s major real estate projects. The Agency has a large team of professionals and a strong network of international contacts that has help made its name in the last decade.  Power couple, Groleau & Doktorczyk are also the owners of the world luxury giant ENGEL & VÖLKERS Montreal / Quebec specialized in the brokerage of prestigious properties.

ABOUT THE CHARLOTTE CONDOS SOCIÉTÉ PROJECT

Inaugurated in May 2018, Charlotte Condos Société is a new real estate project of 243 exclusive units located along the Lachine Canal, in Griffintown, Montreal.  The project represents a perfect symbiosis between prestigious location, luxurious lifestyle and a bordering dynamic community.