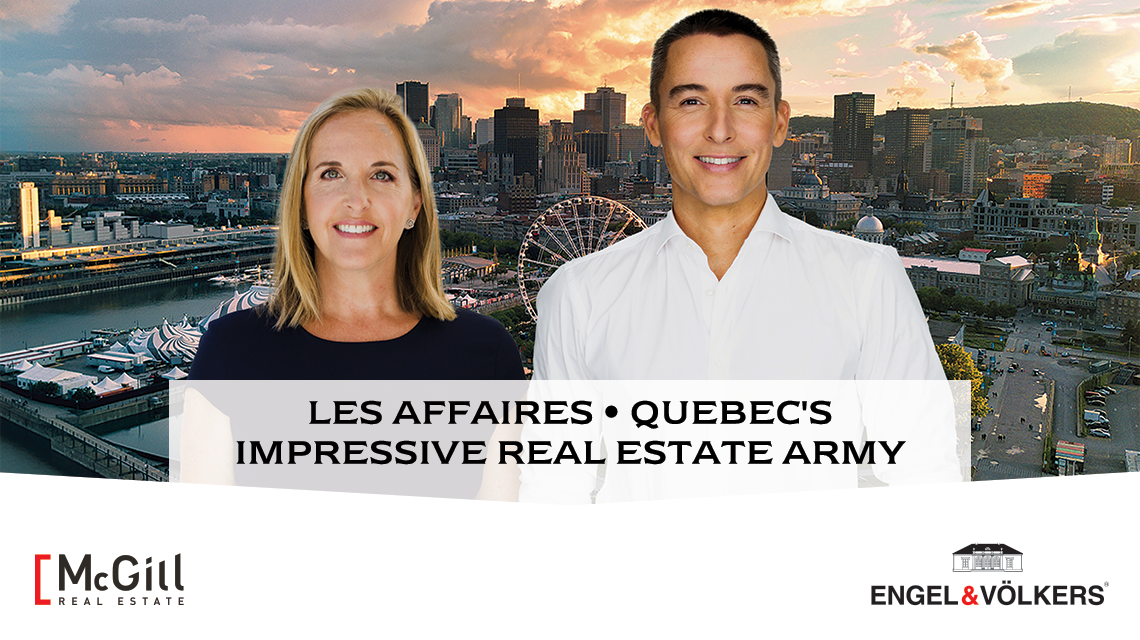 QUEBEC’S IMPRESSIVE REAL ESTATE ARMY
Dominating one real estate specialty is already a feat, so imagine dominating two! That’s the accomplishment achieved by PATRICE GROLEAU and DEBBY DOKTORCZYK, heads of the powerful real estate agencies McGILL REAL ESTATE and ENGEL & VÖLKERS, with a staff of over 200 people and a network of 11 real estate shops strategically positioned throughout the province.

McGILL REAL ESTATE has been present In the Montreal real estate scene for fifteen years now. The real estate agency specialized in the sale and marketing of real estate projects dominates the industry with a monumental 50% market share in the greater Montreal area* (Source: Altus). They no longer need to introduce themselves to Quebec real estate developers who see this high-level real estate partner as an ally of choice in the quest for velocity and optimization of their large-scale condominium projects. In fact, the real estate agency collaborates with the largest real estate developers in the province, which makes them a key player in the industry. “We sell better than anyone else in the industry, McGILL is the best “insurance policy” for projects and the most profitable option” – Patrice Groleau. Today, McGILL has 12,500 condos with an impressive value of 5 billion dollars.

ENGEL & VÖLKERS is the global luxury giant for which the partners (who are also a couple in life) acquired the Quebec rights in spring 2015. In just 3 years, they had already managed to rise to the top of the prestige real estate agencies in the province and have been steadily distancing themselves from the competition since* (Source: IMS). “We even finished #1 in the world among all Engel & Völkers real estate shops! That’s no small feat when you think of markets like Paris, New York, Dubai, Vancouver and other major cities around the world.” – Debby Doktorczyk. The agency generates billions in sales volume. It targets only one percent of real estate brokers in Quebec. “It’s simple, we are the few, if not the only, selective and specialized agencies in the province. A concierge service for an exceptional clientele. – Patrice Groleau.

The agency is about to create a third revolution, this time in COMMERCIAL REAL ESTATE with its real estate brokers specialized in commercial, industrial and office multi-residential. Large commercial mandates and major sales follow one another. “We receive thousands of resumes from real estate brokers and we go through hundreds of interviews and tests, there is a real buzz around our agencies in the brokerage industry. People know that we trained yesterday’s brokerage superstars, created today’s and are building tomorrow’s! – Patrice Groleau. The agencies also have a strong philanthropic presence by being sponsors and major partners of the CHU STE-JUSTINE and CHUM foundations, among others.