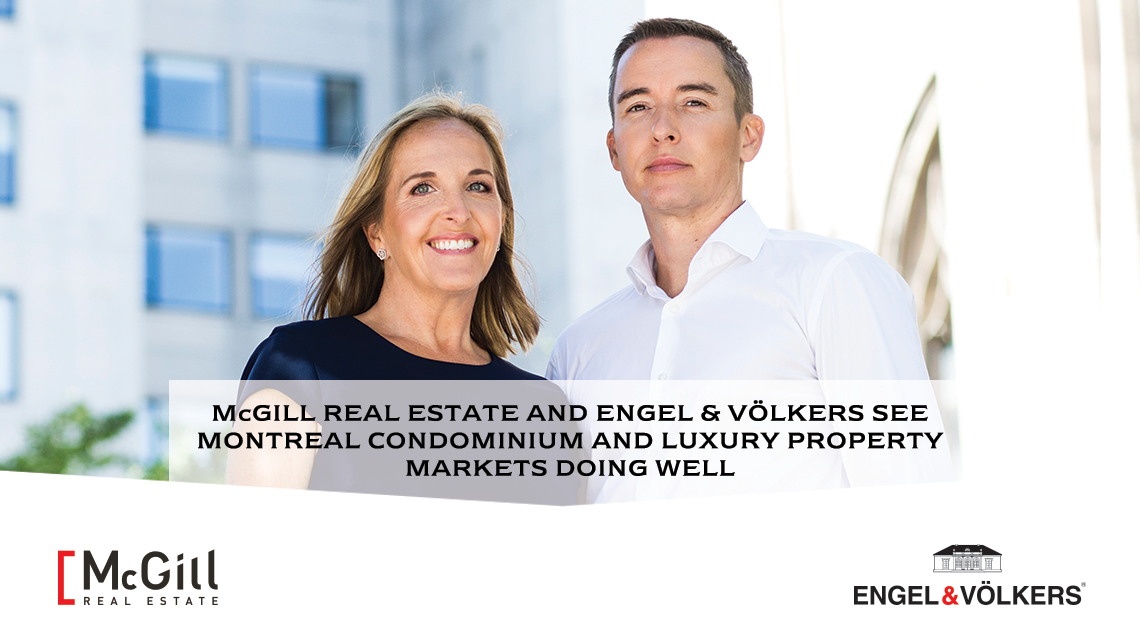 He founded McGill Real Estate in 2004 with his wife, Debby Doktorczyk, and the pair went on to establish Engel & Völkers’ presence in Quebec in 2015. They also have three children and together manage a team of nearly 175 people.

“It’s the key to our continued success and marriage,” said Groleau, who launched 20 new projects or project phases this year, despite the pandemic. “The fact that we love what we do and we love each other.”

Since its founding, McGill Real Estate has sold over 11,000 condos worth more than $4 billion. It currently has 33 new developments for sale, which represents about one-quarter of the total market in Quebec. It’s also behind some of the city’s most iconic projects.

“One of our most significant projects that completely redefined Montreal was District Griffin; in fact, we’re responsible for the sale of 70 percent of all new condos in Griffintown,” said Groleau, who received a graduate degree in real estate management from Harvard University. “In terms of upscale projects, it’s definitely the Four Seasons, which is the first extreme luxury project of international calibre to emerge out of Quebec.”

As the year comes to a close, this is what Groleau had to say about 2020’s challenges and what to expect in 2021.

Even though projections for 2020 were dire due to the global pandemic, by September, Engel & Völkers matched its 2019 numbers with three months left in the year and McGill Real Estate is not slowing down. What was supposed to be a difficult year ended up generating a housing boom. “The Montreal real estate market has demonstrated a lot of resilience, as have all types of properties in metropolitan regions,” said Groleau.

“The government’s decision to not put realty on the list of essential services in early spring, unlike many other provinces, including Ontario and British Columbia, caused an artificial scarcity because brokers weren’t able to work for two months. In the end, it caused prices to rise by nine percent.”

The luxury market is doing excessively well thanks to a lack of inventory in all high-end sectors and products, except for super-sized luxury condominiums that don’t command much local attention, according to Groleau.
“We put 20 new projects or project phases on the market since the beginning of the pandemic,” said Groleau, “which accounts for about 50 per cent of all new condos (1110 out of 2231, based on the Altus Group).”

Sales for single-family homes are up 34 per cent compared to the third quarter of 2019, while condo sales are up 15 percent. “In the short term, it’s the downtown area that was temporarily affected by the absence of international students and tourists, which initially caused a lot of condos that were purchased to be rented out, to go on the market.”

According to Groleau, one in five buyers are newcomers, which means the current travel ban will lead to an increased demand whenever international travel eventually stabilizes. He predicts that students and tourists will slowly start returning in 2021 and that their numbers will return to normal by 2022, even faster if a vaccine is developed.

Playing catchup from the spring when there was a two-month pause in operations, Montreal has been breaking records for sales ever since, which is great news for sellers. “If you’re a seller, it’s now or never because many buyers are getting involved in bidding wars, seeing the properties that interest them most slip through their fingers to the highest bidder,” he said.

“Buyers have to be pre-approved and able to react quickly, but people won’t be making permanent decisions based on a temporary situation forever so sellers have to take advantage of the current momentum and act.”

Things have been on the up and up for a while now, but Groleau warns that the level of growth the market has been experiencing can’t be sustained, and it needs to stabilize. “We’re predicting a soft landing in 2021 with more modest increases, to achieve a certain balance,” he said. “Montreal and Quebec are going to continue to be major attractions though, internationally-speaking.”