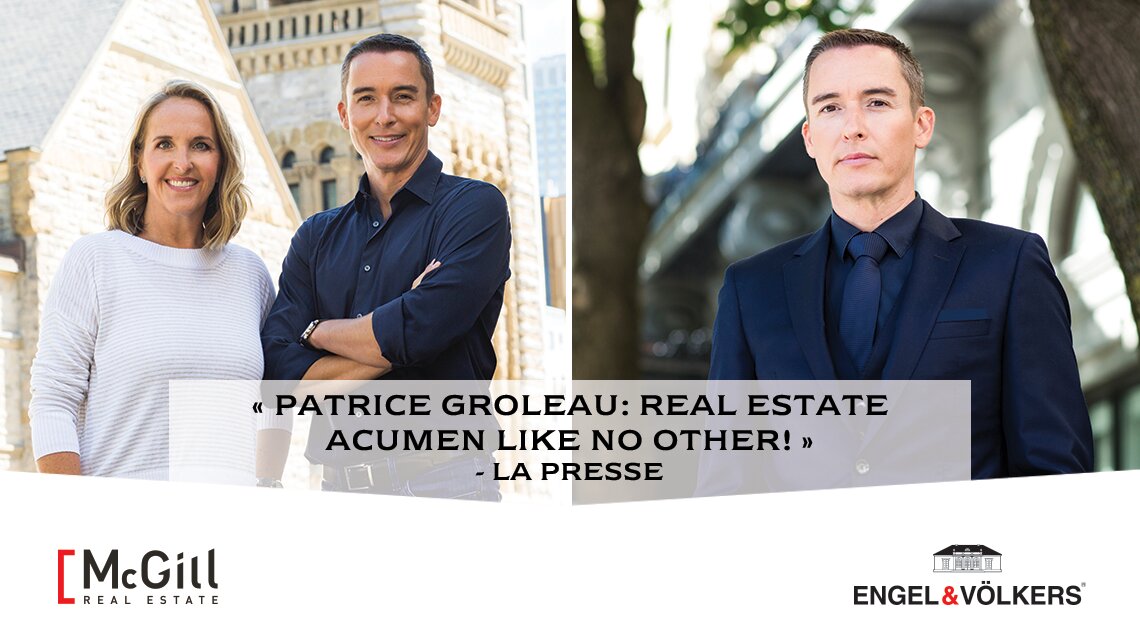 Patrice Groleau: a real estate acumen like no other!

Patrice Groleau and his wife, Debby Doktorczyk, own McGill Real Estate and Engels & Völkers Montreal/Quebec City. Active in the sale of new condos and prestigious residences throughout Quebec, they lead a team of 175 elite specialists who are ready to do business with a clientele in search of excellence. Patrice Groleau readily admits it: for the past 20 years, the couple’s passion for real estate has been lived from morning to night, seven days a week.

The expertise of this tandem is unique: in Montreal, one condo out of four is sold by McGill Real Estate. In this sector, its transaction history surpasses $4 billion. “For several years, we sold more than 70% of the condos in Griffintown,” says Patrice Groleau. And since March? McGill Real Estate and Engel & Völkers are behind the sales of 50% (half!) of the major real estate projects in the Greater Montreal area.

Between reality and optimism
Market, data, trends, telework, regional attractiveness : Patrice Groleau doesn’t wait for official statistics to draw up in real time a revealing portrait of real estate dynamism. Solicited every week by experts, financial planners and the media, he gives the right information, even if it means offending certain perceptions: “Our transactional volume gives us the best data in town to obtain diagnoses and establish proven prognoses,” he says. We know the market inside out and track its evolution for the benefit of buyers, sellers and developers. ”

Patrice Groleau sees the future with optimism: “Some people make permanent decisions based on a temporary situation. This is not necessarily wise. Even if the growth will not be as spectacular as in recent years, the downtown area remains very attractive.  ”The specialist sees the emergence of hybrid models, between city and resort. “But since Montreal is an island, with or without a pandemic, its organic densification will increase property values. It’s an immutable curve. ”

He goes on to say: We see ourselves as real estate ambassadors for the city and the province to an exceptional international clientele, but our strong local entrepreneurial clientele should not be underestimated. There are many more Quebec success stories than you might think! ”

The Quebec dream
Patrice Groleau also points out that among his Quebec clientele, two people out of five are immigrants (twice the provincial average), in search of culture, a way of life and quality schools. In this regard, Montreal stands out: “We receive applications from all parts of the world, including many French-speaking countries, because French is an asset,” he says. We have a gem in our hands, and the excitement is not going to stop, especially since interest rates will be low – at least until 2023. ”

Artificial intelligence, green energy, resources, fresh water supplies as well as political and economic stability, in addition to social programs, are huge benefits, he said. “Montreal is the most Scandinavian city on the continent! A place of the future, safe for anyone who aspires to improve their quality of life. ”

As for the successes of McGill Real Estate and Engel & Völkers, Patrice Groleau emphasizes the excellent continuing education and the high graduation rate of the brokers, multilingual specialists from various cultural backgrounds. Our vision is always long-term,” he says. We accept less than one percent of the brokers who want to join the Engel & Völkers team. This is completely unusual in our industry. ”

Reaching new heights
When it comes to extreme luxury, the portfolio of the Groleau-Doktorczyk tandem and its team includes the spectacular Four Seasons project. From 372 to 836 m2 (4,000 to 9,000 sq. ft.), each residence sells for between $7 and $15 million.

Whatever the size and nature of a project, Patrice Groleau believes that real estate marketing is an art requiring sustained virtuosity and involving thousands of decisions that, when intertwined, will make a big difference. “In this respect, we have restored the nobility of the brokerage profession,” concludes the real estate specialist.