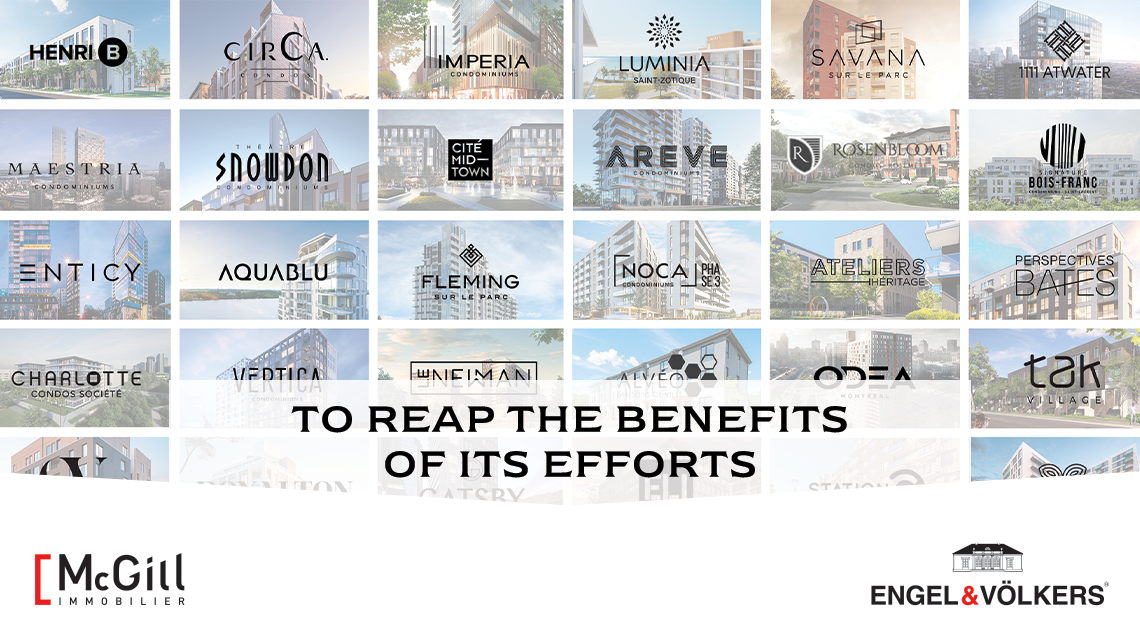 “With the pandemic, many professionals in the real estate industry have put the brakes on in the face of uncertainty. Not Patrice Groleau and Debby Doktorczyk, owners of McGill Immobilier and Engel & Völkers, nor their teams. And after two years of hard work, the hard work is paying off.

“When the pandemic came, we sat down and asked ourselves what we were going to do”, says Patrice Groleau, who with Debby Doktorczyk form a couple in business as in life. They are co-owners of the McGill Immobilier agency and bought the exclusive franchise rights in Quebec from the German luxury property sales and purchase company, Engel & Völkers, seven years ago. Rather than laying off employees, they decided to go into expansion mode. “We’ve never worked so hard,” he confides.

This bold decision paid off with a combined team of more than 200 people, McGill Immobilier went from having a 25% market share in the Montreal area before the pandemic to 50%. For over than 15 years, 12,500 new condominiums have been sold by McGill Immobilier, for more than $5 billion in total value. The agency is now selling properties for 33 real estate projects.

Through Engel & Völkers’ network for the Americas, the Quebec franchise is for the fourth year in a row number one in America in terms of number and volume of transactions, and even number one worldwide for the third year in a row.

INVESTING IN A PASSIONATE TEAM

McGill Real Estate is distinguished first and foremost by its team of 200 employees, which includes Engel & Völkers. The owner of both agencies explains that he carefully selects his brokers, who must have a certain amount of experience, and then takes care of them and invests in them.

For brokers, being part of this passionate team means having access to tools and a structure that makes their job easier, while being able to rely on the agency’s credibility. “We just have a reputation, and it took us 20 years to build it; real estate is a village, reputations are made slowly and broken quickly, which is why we have to have rigor in our work,” summarizes Groleau. In return, the company treats its employees very well: training, access to telemedicine, activities, a support team. “We’re really a big family,” says Groleau.

“The beauty at McGill Immobilier is that the shareholders are my wife and I, unlike the traditional model we know of investment funds, which has short-term profitability horizons,” Groleau believes. As a result, the partners take a longer-term view, where diversified projects help balance the overall portfolio. “We’re not in a business start-up mode. We don’t see ourselves selling; we want our kids to join us if they want to. Basically, we’ve created the utopia of the kind of agency we would have liked to have when we were brokers,” says Groleau, who is willing to take risks for projects he is passionate about.

Results? The agency that was among the first to specialize in the sale of real estate projects in Quebec stands out from its competitors by focusing on customer service. Selling with a broker also ensures the client a certain peace of mind, as with any professional with a license and a code of ethics to respect.

The real estate agency is just as selective about its projects. “Developers submit their projects to us, and we turn them down for all sorts of reasons, either for ethical reasons or velocity (the demand is not there),” Groleau explains. And for developers, doing business with the McGill Immobilier/Engel & Völkers team is a kind of insurance policy: “If we’re not able to sell, no one can,” he adds.

POSITIONING THEMSELVES IN THE LUXURY MARKET

The couple’s passion and authenticity also allowed them to secure Engel & Völkers’ Quebec franchise for 36 years, the longest awarded to date. “The president chose to go with us because he knew he would enjoy collaborating with us and that by applying the same rigor as we did with McGill Immobilier, it could only work,” says Groleau. An eleventh real estate boutique will soon open in Montreal’s West Island.

The brand has a bright future ahead of it and is multiplying its collaborations, such as the one with Dom Pérignon champagnes. “We’re always looking for a little extra, for differentiation, to strengthen the brand. It’s a tool for brokers,” explains Groleau.

After specializing in real estate projects and then entering the luxury residential market, McGill Immobilier now wants to conquer the commercial environment. “We have the trifecta: high-end, project, commercial. It surprised the community,” says Groleau. Precursor, the agency hopes to impose its rhythm on the industry: “The OACIQ [Organisme d'autoréglementation du courtage immobilier du Québec] wants to tackle this environment, which is a bit like the Wild West. We didn’t wait to have rules imposed on us, we went further in the requirements,” says Groleau.

Because, despite the pandemic, Mr. Groleau is convinced that the downtowns have a bright future ahead of them: “There is going to be a return to the city; many companies realize that telecommuting is not viable.”

Montreal, a French-speaking metropolis with an incomparable qualitý of life, will pull its weight and attract more and more immigrants. “That will have an impact on real estate,” Groleau points out.

The quality of the work of developers and architects here will be exported more and more, and McGill Immobilier will be there. Already, several Montreal developers are moving to Quebec City. “It’s certain that we’re likely to follow them, it’s in the logic of things,” foresees Mr. Groleau, who firmly believes in a bright future for McGill Immobilier.

THE IMPORTANCE OF GIVING BACK

“We realize how lucky we are to be able to evolve in our field. We’ve been lucky, it’s a moral obligation to give back,” says Patrice Groleau. McGill Immobilier has been the main sponsor of the Sainte-Justine Ball for several years and a major sponsor of the CHUM campaign, as well as the Fondation du Collège Jean-Eudes. Patrice Groleau, who also sits on the board of directors of the CHUM Foundation, emphasizes the importance of giving back to his community. “All of our brokers support our foundations or foundations of their own. We are very involved in philanthropy,” he concludes.