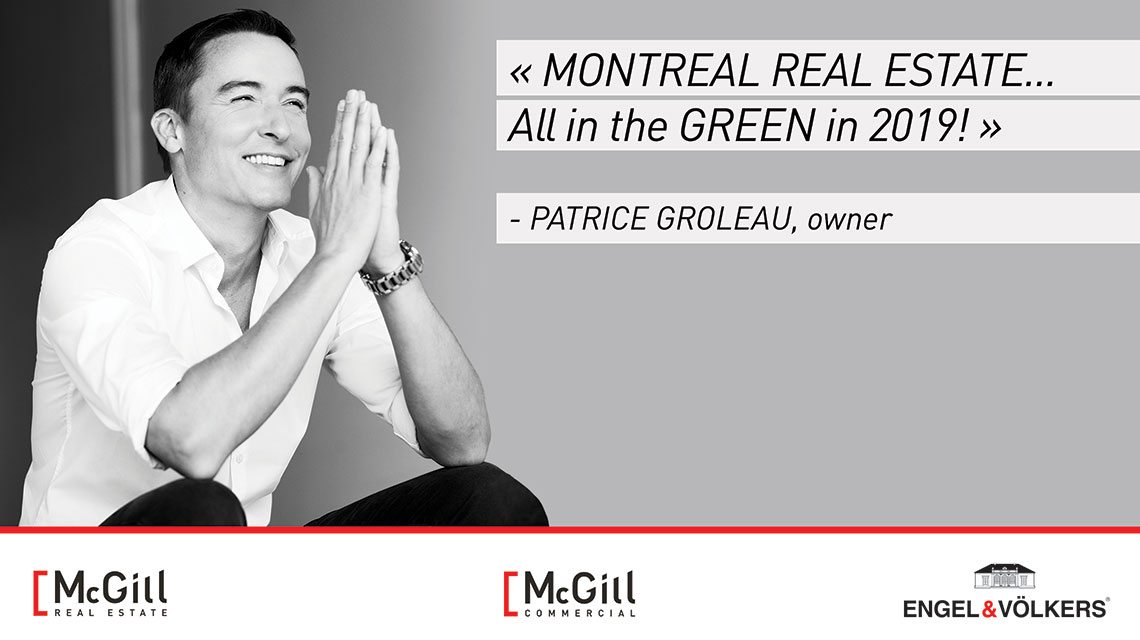 Canada has just been named the best country in the world for quality of life* and 3rd for Education (Montreal # 1 in cities). Montreal is no stranger to this reality. Indeed the Island of Montreal (yes Montreal is an island we tend to forget) faces a perfect alignment of the stars live the most prolific real estate year in its history for a variety of reasons. Everything is green, and it may be the first time in its history. In 2018, in major Canadian cities, such as Montreal and Ottawa, there has been no price drop and this is not expected in 2019. Even if a slight decrease occurred, it would remain a record year.

# 1 Montréal is experiencing natural densification due to the scarcity of land because it is an island limited in the possibility of spreading out indefinitely like its neighbour Toronto and its GTA (Greater Toronto Area). The South Shore, North Shore and West Island sectors are also experiencing an unprecedented real estate boom with a strengthening of the protection of agricultural land, creating a scarcity building land.

# 2 Montreal is the second-largest University-city in America after Boston, although student-to-student ratios vary from one study to another, sometimes even placing Montreal at the top of the list. Our universities have made good marks in the world rankings of the best universities. We think of the sprawling McGill University (which grows its campus year after year), University of Montreal, HEC Montréal, École Polytechnique de Montréal, Concordia University, University of Quebec at Montreal, École de technologie supérieure and the rest of the province that has no reason to envy the metropolis. Université Laval, University of Sherbrooke, Bishop’s University, National School of Public Administration, National Institute of Scientific Research to name a few. The number of foreign students attending our universities is exploding all over the province and has a direct impact on real estate rental and sales. More and more students remain in the province at the end of their studies as well. We also have really good pubic, semi-private and private elementary et high schools and we see a realestate boom surrounding these schools.

# 3 The unemployment rate is at its lowest in 40 years! Although this rate is partially structural with many retirements, the fact remains that it is linked to unprecedented economic strength.

# 4 The government’s decision to partially abandon aeronautics to realign itself with artificial intelligence has been a wise decision. The biggest brains in the field come in flocks because the companies notice, besides the help of subsidies, the quality of high-level manpower. This new image also enhances the perception of our universities on the world stage.

# 5 We are possibly the most “Scandinavian” city in America… Norway, Denmark, Sweden and Finland are still considered as model countries. The Scandinavian countries are popular with their way of rethinking Education, Architecture, Energy production, etc. Basically we are a giant Scandinavian country and Montreal is at the center of this reality. Depending on weather conditions, I believe that in winter we work more diligently, while in summer we are more relaxed. This mix of seasons gives different tones in the workplace and education. We have also developed a capitalist equilibrium and socialist principles that seem to be our strength. It is not perfect but we are at the top of the pack at this level, on the planet. Let’s not forget, it’s the economy that is the leading locomotive that pulls all social programs up.

# 6 It is surprising to hear foreign buyers talk about Political Stability and Economic Stability but we must not look very far, even Europe that was thought to be immune, experiences difficulties, and our neighbours to the south only needed a President (Trump) to completely destabilize the political elite; however, the US economy is doing well for the moment. Let’s see what happens at a later date…

# 7 Social balance, schools, health, many foreign buyers and immigrants fleeing totalitarian regimes, communist or corrupt democracies. They find in us a social balance, affordable schooling and access to universal and free healthcare.

# 8 Ecology, air quality, food, drinking water, all these realities we take for granted, are non-existent in many cities in Africa. (Water tables and streams are dry, making running water in homes impossible) What countries do these people think of when they look at their relocation options? Canada. Chinese buyers also make it a priority in their decisions to flee their polluted cities. We are an Eldorado for the future of their children

# 9 The largest producer of hydroelectricity which is possibly the # 1 energy of the next decades. We have low-cost energy, which leaves more money in our pockets, and it’s a great motivation for companies that need this energy. The extent of natural resources, spread over an immense territory, is an economic windfall shared by a small number. Still, you have to be good at managing it, but I am optimistic for the future.

# 10 Densification… The small population distribution entails significant costs related to urban sprawl, roads, hospitals, services, etc. But Montreal will not avoid the universal urbanization curve. We will achieve densification more efficiently, like other large cities, in the coming years, which will result in savings and an increase in the quality of services. We can already see it with our two super hospitals, the new Champlain Bridge, the REM (Réseau Express Métropolitain) and so on.

# 11 Culture, Dining, Nightlife, Festivals, the most Latin American city, respect for LGBT communities, it is rare that we find all these qualities in a single city in America; we are different from other cities which is our strength and appeal.

# 12 Immigration will be an important lever in 2019, whether for the workforce, students or refugees, we have what it takes to welcome everyone. Do you know that we have one of the largest immigrant community graduate numbers in the world, and it will be a challenge to tie labour needs to this international expertise. We have a Francophile reality that is rather to our advantage despite what we might believe. We become natural communicating vessels for countries such as France, Belgium, and Switzerland but also for francophone Maghreb and Africa. Obviously, the Chinese fell in love with Montreal but also, recently, with the rest of the province. It is a mathematical reality of number. Just as we see more and more Indians, who are buyers in a process of migration or immobilization of capital. We also have an overrepresentation of the countries of Eastern Europe, the Middle East and our neighbours to the South. We must not forget the value of our dollar, which is becoming more than attractive to the wealthy people on the planet in addition to a stroke of the most reasonable life.

I am perhaps optimistic but I remain convinced that I am realistic and that we live in the best era of this world-class metropolis, that is Montreal.

*Source: The 2019 Best Countries rankings, formed in partnership with BAV Group, a unit of global marketing communications company VMLY&R, and the Wharton School of the University of Pennsylvania.